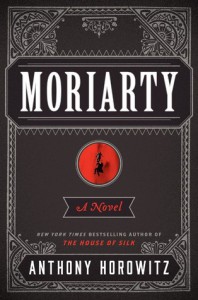 I literally have no idea how to review this book. Even after talking LL's ear off about it, I'm still not sure how much I like and how much I hate this book.

First let me say, this was well written. Very well written. Since he wasn't trying to reprise Watson's style precisely, the narrator was given a chance to shine on his own. As this was in some ways set up differently from other Holmes stories, I didn't find it lacking though Chase is clearly at times all but riffing on the good doctor's style. The descriptions are amazing. One section in particular describes the docks of London better then any other book I've read. I could hear it, see the crowds of people and the plethora of goods, and even smell the stink. There were a few other segments like this but that one stood above the rest. The characters were engaging, memorable, and though plenteous, stood out enough to not become lost or overshadowed.

Fredrick Chase and Althelney Jones make a very interesting duo and I enjoyed getting to know them. I don't know that I can say that Holmes was missing from the book as his shadow/spirit seemed to hover over every conversation and occurrence, but Jones and Chase went a long way to keep the reader from missing him. They worked well together and it was interesting to see more of Scotland Yard then we normally do.

However (you knew it was coming), this gets the distinction of being the first book on my newest shelf: Sledgehammer mystery solving. I could have easily finished this book in a day but I kept stepping away because I couldn't take the stupid. We have a Pinkerton agent and Detective of Scotland Yard walking around and every new person they meet, every new situation, they almost immediately bring up the name of the American Napoleon of Crime. The guy hides in the shadows, you know what he does to people who get in his way, the people you ask aren't going to tell you anyway - are you trying to paint a target on yourselves? It's like playing a game of poker with your hand facing the other players. It's pointless and people in their positions wouldn't do this. I got to where I cringed every time the name came up, it was so idiotic. Caterers and librarians question suspects better then you and actually do detective work. The times when detective work happens, it's never shown. We only see the aftereffects...which are more pointless "We're looking for so and so!" (inaudible rage)

That is my review for the first two thirds of the book. It could be annoying but despite that, I was enjoying reading it. Then came THE TWIST. The whole book hinges on this and all the reviews we've looked at didn't even mention anything about it. I would...but quite frankly there are elements of it I want to address. So if you haven't read this book, I URGE you not to read this spoiler. This is a book you need to experience without foreknowledge. If you're looking at ratings, I can say that my rating of this book before this would only have been a half a star more.

I'll admit that I was completely taken in. I didn't see Chase was Moriarty coming at all. What made me angry was LL called it just from the bits I'd ranted about. Grr. To be fair, Horowitz really fools you. After all, it's rare that a reader will question the narrator and this book gave you very little reason to doubt his word. You're so caught up in the plot and what's going on, you don't really see the little elements there. I even did question why Chase dreamed of the Falls when he didn't go out to see it...but the "last meeting" of Holmes and Moriarty is so pervasive during their investigation, you can believe both of them would dream about it.

So good job, Mr. Horowitz. You really got me there.

Except that I don't agree that "Chase" never lied to us. We can set the whole "omission" thing aside but no, there were parts of the story where he clearly lied to the reader. You can get all technical about "I didn't say my name was Chase but said you can call me Chase" but that's beyond splitting hairs. Further, much of his "confession" is basically a retcon. After reading two thirds of the book, he then takes us by the hand and tours us through the ENTIRE story AGAIN, pointing out all the places that were wrong. Maybe it's a personal thing, but I don't like being told that the couple hours I just spent reading to this point were basically wasted.

Then there's Moriarty's tone. Look, I get that this is his view of the situation. We're getting a one sided story. But the whole last two chapters of the book are full of three things. First is the running theme of: 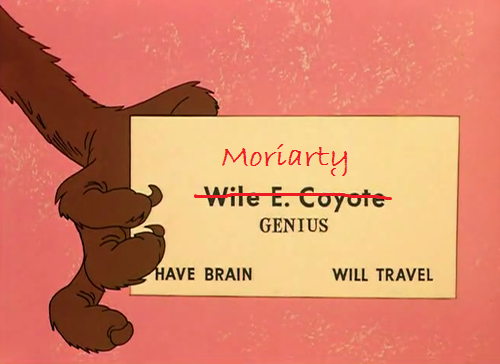 As I'd just told LL the night before, when you have to continually tell yourself and others you are a genius, that raises doubts about its veracity. And he does go on and on about that. Coupled with this is his continual Holmes bashing. Granted, this is his "enemy" but every time there's a new dig about how Holmes wouldn't know about him if it weren't for the Americans feeding him info or how Moriarty wore a disguise to his meeting with Holmes and the detective didn't notice. Again, I realize we're getting one side but rather then showing us Moriarty is a genius, we're being told and seeing him compared to a Holmes made stupid by plot and narration. If I don't like a stupid Watson used to make Holmes look more brilliant (and it's one of my top pet peeves), then neither do I care for this.

Finally, Moriarty goes on and on about how evil the American gangsters (for that's basically what they are) are and how vicious. He even passes judgement on the two loyal members left of his gang. Yet, here is a man who befriended a Scotland Yard detective, who says he still feels friendship for him despite constantly lying to him. But he has no compunction about shooting him in the head. Oh, he feels sorry about it and then has the temerity of saying he's still his friend! The two events that are brutal and horrendous happen at his command, not the Americans. So who's the evil one here? Sorry, Professor but I think you beat even Moran. He at least is honest about his greed and violence.

The more I read of the "truth" and the more I think about it, the more it makes me angry. The twist was pulled off brilliantly, at least with me and clearly others, but rather then taking the book to a new level, it merely continued its mediocrity. Quite frankly, other then some infuriating parts of its own, I think the first one was better. I like this...but truthfully in spite of itself.

PopSugar Challenge: A book with a one-word title