Doctor Who: Engines of War 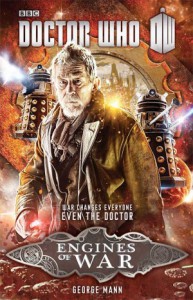 Though he only got one long episode and a guest spot in a regular one, the War Doctor seems to have captivated every one. So when I saw this in my library's catalog, I checked it out immediately.

On the planet of Moldox, Cinder and Finch, two of the few humans left not killed or captured by the Daleks, are on patrol trying to destroy as many of the invaders they can. However, a new abomination with a strange weapon fires and Cinder is caught. How stupid she was to attack them on her own! (Finch is forgotten as if he never existed.) Fortunately for her, a blue box hurtles out of the sky and drops a man into her life. Before she knows it, she's helping a Time Lord find out what the Daleks are doing to her planet. But it's a dangerous time to be a companion to the Doctor and what they discover could end the war in the worst way.

I loved this book. The plot was exciting and at times nerve-wracking, the setting changed from a war-torn planet to Gallefrey and beyond, the writing was great, and the characters were perfect. I could hear John Hurt's distinctive voice saying the Doctor's lines and his melancholy and wounded spirit were captured exactly.

Cinder is one of the best companions I've seen either in books or TV. They play off each other but more importantly, you can see her draw out the "Doctor" part of his character. During the story he becomes more his old self...but of course we know it cannot last.

The Time Lords and the Daleks are compared to each other and neither the Doctor nor the reader likes what they see. This is a dark book and I'll admit, I had to put it down once or twice and read something a bit lighter.

Rassalon and the Time Lords do things to their people and allow things to happen to others that are disturbing. This isn't really a children's book as elements get quite darker then the show does.

Whether you are a huge Doctor Who fan or just a minor one, I do suggest reading this book. It's not a novelization explaining what the show left out but an added element that adds depth. My only caveat would be how dark and disturbing some elements can be.