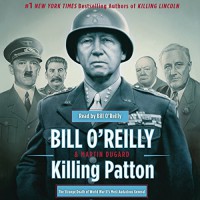 My review of the audiobooks of Killing Lincoln and Killing Kennedy.

While I knew enough about the two men mentioned above, I never really learned a great deal about Patton. The recent History Channel show The World Wars taught me more then I ever learned in school. So I was a bit worried starting this but the authors ensured you knew as much as you could going in. You learn about the man, how he saw the world, and how others saw him. The ending of the war was described in great detail; you saw how things changed, how the Battle of the Bulge caught people unaware, and the politics of everything. I had had no idea going in how little anyone cared for Patton.

I also learned things I really didn't want to. Both the UK and the USA had tried to cozy up to the Soviets, not that it did either any good. They learned to their cost but I'd particularly long had this wistful thought that Churchill had known better.

Once again, O'Reilly's reading of the book was very good. He's clearly interested in the historical situation and his feelings about what is going on at the time come through clearly. One feels more like they're listening to him discuss the story rather then reading it from a book.

The most interesting part of the book was the long line of people who wanted Patton out of the way. There certainly seems to be circumstantial evidence of plans to take care of their problem and the lack of basically any investigation into a general's death is rather shocking. Do I think he was murdered? I'm not sure and the authors make clear they're not saying equivocally he was. But I do agree it wasn't handled right; it doesn't look right. Either they didn't care at all that a general was killed, they were extremely negligent, or..."there's something they don't want you to know."