If you are unfamiliar with the series, check out my review of the first album where I discuss the show and the main characters involved in it.

Another good set of stories with great illustrations. This is one of those where I know for certain that two of the stories are adaptations from the show. Both of the stories are very well done and when I saw the second one for the first time a couple of years ago, I instantly recognized it. This is another book that also contains cross-sections of equipment and places in the series. 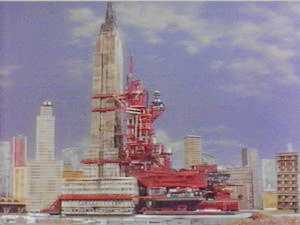 One of the adaptations of an episodes, this is a particularly interesting story. An attempt to move the historic Empire State Building (which you have to see done in the show, it's amazing) goes horribly wrong and International Rescue must race to America without Thunderbird 2.

The other adaptation, IR and Lady Penelope are caught up in a gang's explosive attacks on people and places. Can they rescue and/or stop the explosives in time?

This is a crazy story. A rocket is returning to Earth but the crew is non-responsive. IR attempts to bring the crashing vehicle to ground safely, but it crashes, unleashing a huge alien on a remote rainforest. IR must stop it before it takes out cities.

Again, very little here. The stories are put together very well and the illustrations work wonderfully with the text. I find the third story a bit...egh, but for the age these stories are written for, it would be quite interesting and exciting.

If you are a fan of the series, do check this one out. I personally still love reading Terror in New York City, as it is a great adaptation. If new to the show, do check out the first album before the others.