Thunderbirds to the Rescue (Thunderbirds Comic Album # 1) - One of my favorite shows of all time! 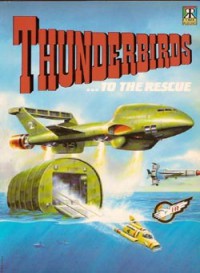 Thunderbirds, for those (most probably from America) who don't know, is almost certainly Gerry Anderson's most famous TV show. Made for children, it concerned a wealthy family in the distant future (remember this is the 1960sish) who live on an island and run the anonymous International Rescue, an organization who use fantastic technology to save lives no matter who they are or the country they are located in. 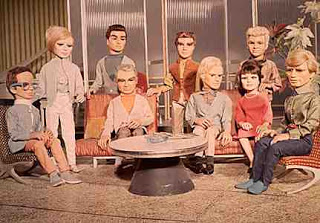 The Tracy family has ties to aircraft and space companies, which they use to aid them in covering their tracks. The father and five sons, with some outside help, run the organization and have many interesting adventures. Did I mention the show was made with marionette puppets? Yep, a kid's show done in SUPERMARIONETTION (a word he come up with because of some admittedly awesome technical innovations. This is not Pinocchio, these have moving eyes, talking mouths, and flying and exploding (especially exploding) stuff.

Quick intro to the main characters, which will only appear in this review:

Jeff Tracy: The patriarch of the family and the head of an Aircraft/Space Company, he created International Rescue after the death of his wife in a remote area inaccessible to conventional rescue units.

Scott Tracy: The first (or in some cases third born)son who served with distinction in the Air section of the armed forces. An exceptional pilot, he commands Thunderbird One as well as their mobile commander.

John Tracy: The third (or in some cases first born) son who serves on Thunderbird Five, their space listening station. Able to pick up any radio stations, he then contacts the island to set up the rescue as well as serves as the voice of International Rescue to callers for help. He is trained as an Astronaut.

Virgil Tracy: The second born, he is the pilot of Thunderbird Two, monstrous craft that serves as their transport and heavy lift vessel. While slower then his brother's craft, his ship can carry 'pods' set up for specific types of rescue. This makes his the most versatile of the crafts. He is a painter, musician, an artist in general.

Gordon Tracy: The fourth son, Gordon was trained in the WASPs (from STINGRAY) and so he is their underwater rescue specialist as well as one of their catch all rescuers. His craft is Thunderbird Four, a small submersible which is carried to rescues in one of the pods by Thunderbird Two.

Alan Tracy: The fifth and baby of the family (and sometimes it shows), he has some Astronaut training as well as being a former race car driver. His main craft is Thunderbird Three, their rocket that ferries men and equipment to Thunderbird Five. He serves as John's relief to give his older brother ground time as well as serving with Gordon as a catch all helper.

Brains: The creator of all the Thunderbird machines, he is a young man who Mr. Tracy took under his wing and asked to join their organization. Though not a member of the family, he is clearly a well respected and cared for member of the team.

Like the Stingray comics I already reviewed, some of the later comics in this series contain comics that are adaptations of episodes from the show. These three, however, I can not say either way. I've not seen every single episode of the series, but I can say if they exist in episode form, I've never seen them.

An earthquake strikes a city in Iran, bringing International Rescue there. All may not be as it seems though, as four other nearby cities are hit in a pattern that suggests this might be more than the forces of nature. The Thunderbird aircraft are attacked, the men captured: this is a very exciting story.

A huge nuclear powered cruise ship is attacked by local revolutionaries causing International Rescue to come save locals as well as passengers when the ship causes flooding of the canal. However, the Tracy men have more to worry about then the revolutionaries as the army falsely believes they are in league with the attackers. Gordon features in this along with his craft, Thunderbird Four.

While the military is conducting new missile tests in Antarctica, a stray one hits the nuclear power plant of the research station. With limited time remaining, a new power plant is brought in with the help of International Rescue. This one is neat as it features a smaller piece of their equipment, the Firefly; their main firefighting vehicle.

Surprising little. The artwork is different on each one, but all are very good. The characters are very recognizable and the stories are well paced. The main problem is the difficulty for Americans and some other countries in finding THUNDERBIRD merchandise, as only the original show's episodes are readily attainable as well as more stuff from the new (and questionably adequate) movie. These books I'm reading might pop up on Amazon.com or Ebay at times, but you can't just get them through a local bookstore.

If you have a young child who likes futuristic and action/adventure stuff, this is a great little series (both TV and comic book) to pick up. While old, it's aged fairly well and might be a novelty for kids who are used to computer animation and cartoons. If you were or are a fan of any of Gerry Anderson's work or are interested in seeing what the fuss is about, these might serve to either further your enjoyment of his work or get you interested in it. All in all, a great read but not perhaps for everyone.

*note* Quick apology for the length and extra info, but if I'm not really knowledgeable about something but interested, I like to have extra facts. So I felt I should for this, which is not as well known as say, Harry Potter.