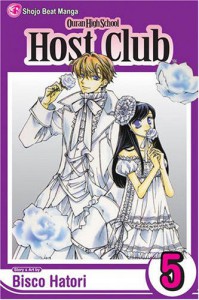 Another volume with both stories from the anime and ones new to me.

The first was a new one where Haruhi's tenure at Ouran may come to an end because she has scored third in the class rankings. To keep her scholarship, she must get the top score, so she has to take the make up test. A tutor is found for her, but the club is their less then helpful selves and the female student who is the tutor seems to have...issues with Tamaki.

The second story is an arc over a few chapters. It is a summer story that is kept virtually intact in the anime. The club descends on Haruhi's place of summer employment and wreaks it's usually havoc. There is also some character growth for at least one member and Haruhi's secret fear comes into play again.

The third story also takes place in the anime with some minor changes. Nekozawa comes back (always good for hilarity) and this time we meet his sister who is tragically scared of the dark (which Nekozawa constitutionally needs) and who worryingly knows the ends and outs of shojo manga. The best (and slightly creepy) scene in the volume is when Kirimi sees the Host club dress up in their...police uniforms?!...and matter of factly states: Male Harem.

All in all, a good volume. It didn't get the full stars mostly because while the stories are good, I had seen most of them before and while good they aren't as amazing as other stories I've seen in the series. A solid volume but I'm looking forward to the next one.
3296 BOOKS
Goodreads