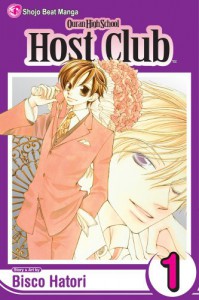 *The Gush*
First let me say that shojo is not my preferred manga reading. Rurouni Kenshin, Inuyasha, etc: shounen is definitely more my style. But when my sister introduced this to me, I fell in love instantly and permanently. This is a hysterical series that does not in anyway take itself seriously but has a touching plot of friendship and self-discovery. In short, it has a little bit of everything. Often times this leads to nothing more than a mess; here, it's all part of the craziness that makes this series so delightful.
Characters: Haruhi is one of the best heroines I've seen in manga for awhile. She has no magical powers (like Sailor Moon) and she is a smart, determined, and strong woman (not really like the heroine of Fruits Basket). For all that though, she is a flawed character and grows and develops during the series. She is very...real and I found I loved her all the more for that. Her 'reverse harem' (from the shoujo genre: a 'harem' manga has a male main character surrounded by female characters; a 'reverse harem' has a female main character surrounded by male characters) of club members vary wildly in personality and roles to play but each is memorable and stand out from the others. These club members also serve an additional role of helping the story satirize shoujo and manga cliches.
Plot: This is the introductory book, so there is less plot and more introduction but the plot of the entire series is a wonderful tale of coming of age and discovery while having loads of fun along the way.
Writing: This manga pokes fun at every cliche in the manga and shoujo genre and in so doing, clearly does not take itself seriously. It is a fun loving manga that balances funny with poignant, crazy with serious, childishness with growing up. It is an unique manga that anyone familiar with manga and anime should take a look at.

*The Negative*
The main problem I think anyone might have with this manga is the fact that it is not a good intro manga series. If you have never read a manga before, the cliches and allusions will mean little and make the story confusing. This is a series for old hats and fans of the genre. Also, some of the humor and situations taking place might surprise someone who does not know Japanese humor.

*Summary*
READ! If you love manga, particularly shoujo, read. If you aren't, read Fruits Basket or others...so you can read this!

*Note*
If you don't want to read this, watch the anime. It is extremely well done.
3296 BOOKS
Goodreads