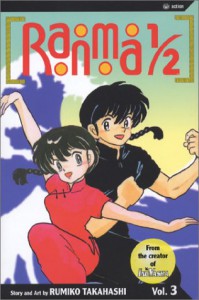 My Review of Volume One

My Review of Volume Two

*The Gush*
The ending of the ice skating competition and the Shampoo introduction! Yeah!...I can't stand Shampoo. (sulks) The ice skating martial art competition goes about how you'd expect: destruction of the ice, impossible aerial attacks, sweet Ranma/Akane moment and Ryoga arriving to mess things up halfway through. Just as it ends, Shampoo enters the picture swinging her 'bleach balls of doom' in order to kill female Ranma. Akane and Ryoga are not much of a help at first, though Akane does become an impediment which Shampoo is forced to take care of. The hijinks continues as Shampoo falls in love with male Ranma while still trying to kill girl!Ranma, Akane's memories of Ranma are 'Shampooed' away (yeah, I still cringe every time), and P-chan is nearly served as lunch.

The 'battle' on the ice rink is rather fun to see and how they break through to Akane's memories is very touching and funny. And I love the female ice skater where she names every cute thing and then acts like a klepto. It is hilarious, particularly when she steals the blanket off her partner at one point. I laugh every times she names something new.

And what is up with everyone falling in love with one or the other gender of Ranma? He's a nice, if not incredibly bright guy and a cute girl but it's like he's got pheromones or something. I like him better then Ryoga though, although Ryoga for all his stubbornness and sense of direction he appears to have bequeathed to Roranora Zoro (One Piece) is not that bad a character. He is just not meant to rival Ranma.

I really can't stand Shampoo. She's rather stereotypical, very flat as a character, and attacks people by...shampooing their hair?! Yeah, not really digging this new character.

Just to find out the ending of the ice skating makes this volume worth reading and the Shampoo story is wrapped up in the same book. Hope the next volume is a bit more interesting though.
3296 BOOKS
Goodreads