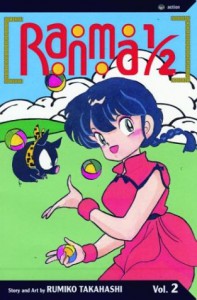 As mentioned in the previous review (see above), the Ranma chapters follow a rather predictable pattern. In the two stories (part of the second as well as the end of the Ryoga tale) in this volume, we meet Kuno's sister Kodachi, who challenges Akane to Martial Rhythmic Gymnastics, falls in love with male Ranma, and fights against female Ranma. The second story starts with Akane being challenged to couples Martial Ice Skating in order to keep the female of the group from stealing P-chan Ryoga in his cursed pig form - Akane doesn't know this yet. Ranma of course will serve as her male partner. Rather similar, but that's not where the best parts of the manga are. Like all Sitcoms, the events are mere frame-work, interesting enough perhaps but usually predictable. What makes it funny and interesting is the hijinks that come out of the situation. For example, in the first story, Kodachi who is a female Kuno (even looks exactly like him) falls in love with one Ranma and hates the other. Hot and Cold water with their corresponding changes occur with hilarious outcomes. In the ice skating story, not only does P-chan's situation feature prominently, but Ranma has a horrible (but funny) experience thanks to his female form.

Most of the characters continue to be basically 2-D, but Ranma, Akane, and Ryoga are getting fleshed out a bit. The 'non-Romance' between Ranma and Akane shows no sign of changing, though their hostility fluctuates as they learn things about each other...and then remember they're suppose to dislike each other.

The main issue was discussed fully in the review for Volume One (see above link) as well as the female nudity that takes place at least once a volume.

The main thing here would be the impossibility/unbelievability of the events: Martial Rhythmic Gymnastics...martial ice skating with a Dance of Death?! Yeah, when pigs fly...oh look, P-chan is dashing and flying across the room! So cute! ;P