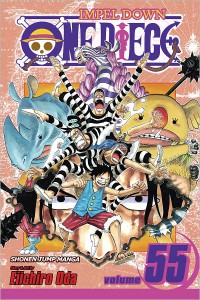 Luffy's fight with Magellan - the warden with the Venom-Venom fruit - is horrible. I think truly for the first time, Luffy has to consciously decide to sacrifice something, his hands, in order to win and save someone. Bon Clay has returned and I love him. His friendship with Straw Hat was true and has survived in Impel Down. He risks his life to take Luffy to Emperio Irankov (who looks remarkably like Tim Curry from Rocky Horror). He ate the Horm-Horm Fruit and can manipulate hormones at will. He uses this to help Luffy's body fight the poison and once again Luffy's will carries him above and beyond. Ivan fought with Dragon, so he helps Luffy escape to save Ace. The battle through the prison is crazy with old enemies becoming allies and one of the Seven Warlords, Jimbei, fighting at Luffy's side.