One Piece Vol 53: Natural Born King - and yet he bows 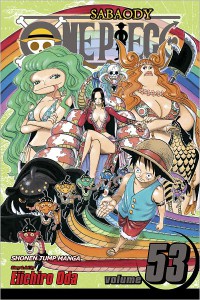 Not much a fan of this book. Most of it was clueless women being hilarious about see a man for the first time. The end however was sad but touching. Luffy 's grown a lot. And seeing him bow to ask for someones life reminded me of Vivi and Drum Kingdom. He may still be an idiot but he's learning.

This volume always makes me tear up. Losing his crew (nakama) one by one hast to be Luffy's worse nightmare and it leaves him open to Kuma's power. Though, knowing what comes later, Kuma's "We'll never see each other again. Farewell" kills me.

Luffy's sent flying to Amazon Lily, the nation only of women, where they use Haki. Yeah, he was really evil. The first parts of his time there are...uncomfortable (see above), but Boa Hancock's (one of the Seven Warlords) arrival puts paid to that. I"m not a fan of how she acts often but her and her sisters are amazing, particularly when you find out their history.

Luffy in here is touching. He fights to protect the people who saved him, he unknowingly uses his Haki of the Supreme King - which we've seen before but not realized what was going on ("even the waves are angry") - and then he covers Sandersonia's back because "I don't want to kill you." However, he finally discovers Ace's fate and the panel when he has to decide to temporary turn his back on his crew...*tear*.

(Having seen the same scene in the anime, it's was even more touching.)