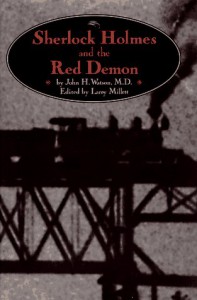 If I don’t start a series at the beginning, sometimes the previous stories don’t stand out in my memory, no matter how much I read them. This book suffers partially from this personal phenomenon though I also seem to repress parts of the book because of what happens at the end (see below). Before that can happen again, I’m getting this review done.

Many authors have written with varying success pastiches of supposed ‘lost’ cases of Holmes and Watson. One of the better authors I’ve found is Larry Millett, even though his stories take Holmes far from fog-shrouded London and into the wilds of Minnesota. This is his first attempt and though I find some of the later ones more developed and with tighter writing, this is a great first book. Well written with few problems, the plot is riveting and the mystery almost impossible to solve. The clues are there but even reading for the third time, I still couldn’t pick them out until the reveal. The characters, both historical and fiction, are well done with depth and a distinctive voice all their own.

One of the best features of his book (and the consecutive ones) is his frequent use of superscript number that correspond to end notes. This is one of those books I geek out over and I use two bookmarks, one solely to keep my place in the end notes. They add a great deal to the story and are always interesting to read.

The author has that ability, sadly rare, to perfectly weave history to fiction until you are not sure where one begins and the other ends. Others might be patch jobs; this is a tapestry.

All the above is not to say the book is without its problems. The author, like so many others facing the same temptation, tends to over indulge in the creation of ‘lost cases’ that Watson alludes to. While most readers of Sherlock Holmes pastiches get used to it, it still annoys me at times.

His Holmes and Watson at times seem to have multiple personalities. One chapter, they react one way, the next time they react completely differently to a similar situation. The plot explains this to a degree as the action continues to ramp up, it affects the characters as they deal with deadly situations in a world vastly different from the London they know so intimately. But it still causes reading whiplash at times.

This is my main issue with the book but since it is so entwined with the ending, I have to hide it or hide the entire review, and I didn’t want to do that. At the end, in the midst of the climatic denouement, I remembered why I couldn’t recall how this book ended. I had blocked it. The reason for this is twofold. One, the actual historical events during the fire at Hinckley were horrific. Over 400 people died in one of the most horrible ways possible and the author captures that. The air seems drier and hotter as you read; you can almost feel the flames coming for you. And a few times he showed what happened when a person lost to the fire. It was a bit…distressing (understatement) to read because this had really happened to real people. The second reason is the major one for me. I still have problems reading it. When Holmes confronts the Red Demon, the villain becomes covered in flammable liquid and Holmes stops him by using the lighter (plot point) and setting…him…ablaze. This isn’t the Downey Jr. action hero Holmes, this is Holmes from the books who rarely fires a gun and he’s setting people on fire. While not graphic, it is in a word, shocking.

*Conclusion*
If you like or want to read beyond the Doyle canon, this is a well written and interesting continuing story. The history Millett adds with his end notes lends a richness to the story which helps this stand out over other similar books. It is, however, a bit rough at times and the readers should be prepared.
3296 BOOKS
Goodreads