The Art of Bioshock Infinite - WOW! Ok, confession time. I've not actually played this game yet. I probably will, but I have not actually worked through the levels on my own. I feel as if I have. I feel as if I've lived with this game for two+ years thanks to my husband who is a huge fan of Bioshock 1 & 2. After having their plots carefully explained to me in minuet detail, I feel as if I've played them. Then Ken Levine announced this game and I was 'forced' to live with its existence for two years. By the time February of this year came, I was praying it would come out, just so it could actually be played! I'm not a fan of prolonging the agony of waiting for the next book, movie, game, etc. to come out. By that point, granted I was sufficiently intrigued, so I watched my husband devour the game and make it through as quickly as he could while working at the same time.

And I'll admit it...it's a great game. The ideas are very thought provoking no matter what your beliefs and the characters are dynamic and fascinating, even if most are not very nice. It is not as outwardly creepy as Rapture was, but rather the creep factor comes from subtle things that are pervasive and yet don't have big neon signs of "we'ze the baddies!" hanging everywhere. Very intriguing.

And the environment! Oh my gosh, it's beyond words! Which is why, in this very rambling way, we decided to buy the art book of the game. We generally don't do that, but we are very glad in this instance that we did.

I'll admit it, the creative process of creating characters, props, and an entire world fascinates me. The amount of research that went into the costumes, ideas placed on signs, and the architecture is incredible. The artwork is beautiful and vibrantly printed on durable paper while the book is designed to be reminiscent of covers and insides of books of the time period. A very nice extra touch. This book can be flipped through for a quick browse or really dwelt on the reader looks at all the different ideas that were floated around. Brief text gives basic explanations of what is on the page. 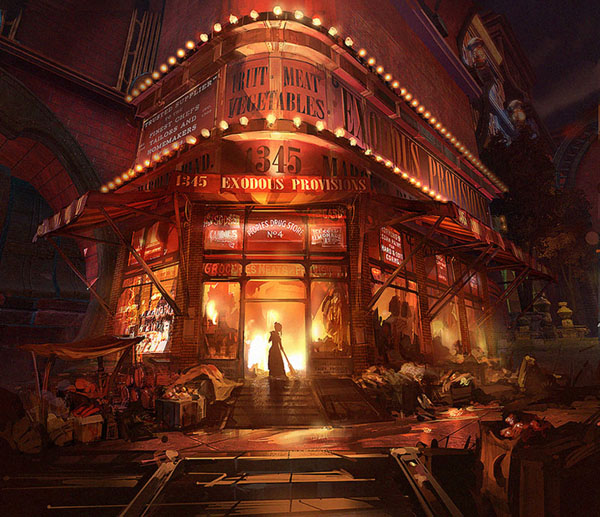 There are two minor issues I have with this book. One is that the text is VERY brief and is not enough to really explain why one was chosen over another. You may get more images but I would have liked to seen a bit more of the creative process actually laid out, even in textual form. The second is that some of the original ideas that were ultimately dropped from the game idea are...exceedingly disturbing and there is no warming before they are basically shoved in your face. Some people this might not bother, but some it definitely will. The one that comes quickly to mind is where people caught up between...different planes might be the best description were originally thought to perhaps become fused with their counterpart in the other plane. The result are beyond macabre and sometimes even beyond grotesque. It was highly shocking and might be difficult for some with no warning.

If you are a fan of the game or interested in art and/or game design, this is a definitely a book to check out. While weak on explanations, the images are incredible and worth seeing.