Star Trek Movie Tie-In Novel: Why is it that we need novels to explain what the hell happens in a movie? Isn't that the movie's job? 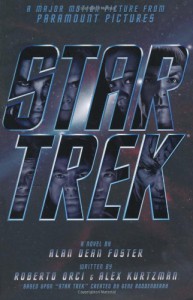 I'm admittedly not a huge fan of Alan Dean Foster, particularly where media tie-ins are concerned. *cough Star Wars cough*. However, this was a wonderful fleshed out look at the movie. Why has it become necessary to read novelizations of movies simply to answer glaring questions raised by bad cuts or missing parts of the movie? It is particularly true of Star Trek movies, apparently, and one vexation I'd quite like to see end. However, I enjoyed the novel, both the familiar and the new.

All the familiar people were kept in the character with additional elements that merely added to their foundation we saw in the movie.

The same as the movie with added elements to help it make sense. Amazing thought. My favorite change from the movie was Spock putting the Vulcan beat down on the Romulans they first meet after beaming over rather than the phaser battle. It adds greatly to his character and gives him time in the spotlight.

My biggest issue is the writing style.

Here I feel I need to explain how I personally read. The best way I can describe is when I open a book, I get into a lazy river (or a fast paced one) on an inner tube. The writing style directs me and I do best if it leads me on a consistent and ever flowing ride. When a book is written like an inconsistent wave pool or a crazy river ride, the starts, stops, and unbalanced rhythm renders me incapable or retaining what I'm reading. That is why I am not a fan of some of the more popular writers.

Alan Dean Foster's writing style is like that for me. I am unable to catch the flow of his writing and consequently his books are like slogging through mud to me. I was able to do so this time because I wished to read the book enough and had watched the movie several times but it took much longer than it should have.

I want to try the audio book of this. Sometimes listening rather than reading those authors helps. Plus it's read by Zachary Quinto. 'Nuff said.

While personally, the writing style made it difficult, this is a good novelization of the movie. If you didn't like the movie, you probably won't like this. If you did, you will most likely be happy with this book.