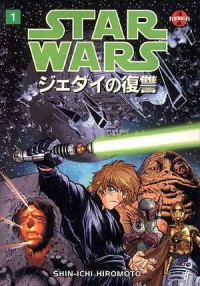 **Warning: I'm going to assume that everyone reading this review has seen Return of the Jedi at least once. Therefore, I will not be employing any measures to hide spoilers.

If you've read any of my reviews on the A New Hope manga adaptation, then you know how highly I think of that series. The artwork, the pace of the story with the direct dialogue from the movie, and the adaptation of the familiar characters to the manga style are quite good. The same holds true for this series.

The Return of the Jedi manga is drawn by a different artist and it shows...and not in a

bad way. The space scenes are beautiful and there is a amazing full page drawing of Vader in all his menacing glory. But it is in the characters and settings where the change in artists really shines. Return of the Jedi is a more mature, darker film then A New Hope and the two artists' style match this perfectly. Hisao Tamaki, the mangaka (manga artist) of The New Hope manga, draws the characters a bit on the childish side. Not enough to be sicky sweet or ruin what is still an action/adventure tale, but it is noticeable when compared to Shin-ichi Hiromoto - who illustrated this one. In here, Jabba's Palace is gritty and almost but not quite too bawdy for children. The characters are rougher, almost weathered at times. This is illustrated best perhaps in Chewbacca. I mentioned in my review of one of A New Hope's manga that Chewbacca is drawn almost cute at times, but still with the idea of strength and slight scariness that is in the movie. Here the gloves are off; he's scary looking with clear views of his long, sharp teeth. The Rancor fight is suitably gruesome and by and large this is a much more...dark look as befits what I think of as the darkest movie of the original three.

In short, be prepared for the soundtrack to play in your brain as you read this book.

There are two reasons I can not in good conscience give this and the previous series the full 5 stars. Both of these are enumerated more fully in the first review of A New Hope, but I will briefly cover them here.

1). The Price. Dark Horse is known for, I think, high prices on their stuff and I find that ten dollars per book when there are four books in a series a bit much. It would be less of an issue if these were hardback books or better made but they are rather flimsy (in my experience) and not the best paperback graphic novels. In short, I'm glad I found them used.

2) My main issue is the fact that they messed with the pictures from the original. In Japanese, you read right to left rather then left to right; ergo, the back of the book by Western standards is actually the front cover on manga in its original form. This caused publishers over here problems as they began to translate and publish popular series. They decided that readers couldn't handle reading it the original way and so they flipped the pictures into a mirror image of their original form. Picture your favorite artwork messed with so Mona Lisa is smiling the other direction or the tower in Starry, Starry Night is on the right instead of the left. You might not even recognize some pieces. Manga artists were upset as were many Western readers, and finally in the mid 2000s most of the big publishers decided to print them in the original format and place a page explaining how to read them for new readers. In Dark Horses' defense, they did explain on a page in this and all their other Star Wars manga books the situation and why they chose to do this. However, for fans of the movie, it is rather noticeable at times.

If you are a fan of Star Wars or manga, I would suggest giving this a read as it is a great adaptation of the movie. If you are uninterested in either of these, I'd give it a miss.