One Piece 68: The Continuing Stoory... 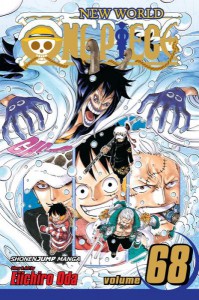 Spoiler alert will not be for this volume but rather for people who haven't read the series to this point (of which I would be one if it weren't for my local Library - LOVE!).

Up until the latest story arc, I'd said that One Piece only got better with every volume that came out. Sometimes the anime arcs d r a g on s o o o long but Oda is extremely able at presenting vast amounts of information, character growth, action, and story quickly without the reader feeling as if they are watching a powerpoint. I don't know how he does it, but if he weren't able to, I wouldn't be reading this because it would be easily twice as long as it already is. A good example of the difference between the manga and the anime is the Alabasta arc. Oh my God, that was nearly painful to get through in the anime but the manga covered the same events so quickly and, in my opinion, better.

I cannot put into words how much I disliked this arc since it was introduced a couple volumes ago. The fact that thisis what I'm having to wait for makes it worse. So, I'll admit it, I picked this up from the Library out of obligation and not much else.

But this volume has cooled my anger at this arc. I'm still not terribly happy about this, but this volume does explain some things, answers some questions that I really needed to understand much less enjoy, and the characters start to actually do something besides wander around in a daze. Caesar Clown is scary, maybe scarier then some of the other really weird baddies our crew has faced on the Grand Line and seeing some...acquaintances from pre-time skip was interesting.

So, my zeal for the series has begun to revive...but I'll be SO much happier when we leave Punk Hazard far behind.