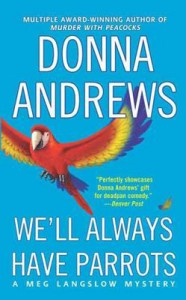 This was at once really wonderful and terribly disappointing. While I ended up reading it in one go in only hours (till early morning), it ended up being as predictable as I feared. On the bright side, we get to see more of Michael's world; however, we sadly don't get away from her Mom and Dad.

It's another convention for Meg and Michael for his character Mephisto's fan favorite TV show, Porfiria (ha!), Queen of the Jungle, and this one's turning out to be most interesting. A tiger and freed parrots and monkeys running around everywhere are only the start. Her Mom and Dad arrive with Spike, Meg's roped into performing staged sword fights, and the QB - who plays Porfiria - is up to her old tricks

To her face, people pretended that QB stood for "Queen Bee," but even she wasn't stupid enough to ignore the obvious, slightly longer alternative to the second word. Since she never objected to being called the QB, I suspected she secretly relished the substitution.

When the QB winds up with her head bashed in, the list of people with grudges is long and Meg thinks it all comes back to a scrap of comic and a repeated phrase from an African Grey - "I own them."

I felt like this was a departure from some of the repeated elements of the previous books and I had to approve. Also, Michael and his world finally got it's day in the sun. But Meg doesn't slide into the background, she doesn't even spend much time at her booth selling her weapons.

There were many great moments that left me chuckling, though few with the impact I've had from her other books. I loved the convention setting and the author makes liberal use of it. The only problem I had was the mystery. *sigh* It was predictable almost from first meeting the killer.

So it was pretty obvious that Alric Steele was acting weird, particularly when the nephew of the comic's creator told a few things and seemed to know more then seeing a few first season shows could explain. I thought early on the artist was alive and Steele was him. Called that completely.

As the other books had kept me guessing, this was disappointing. Still, there was a lot to love about this book and I did enjoy it. From the zaniness of her father,

...the cameraman had begun filming some nut who'd shinnied up a pillar in the lobby and was doing something to one of the parrots. I moved to where I could get a better angle and saw that it was Dad, teetering just below the lobby ceiling, his legs locked around the pillar. With one hadn, he was waggling a piece of fruit, trying to catch the parrot's eye, while the other hand held Michael's cassette recorder as close to the parrot as possible.

to her changing feelings on fashion,

They all looked at a tall, middle-aged woman sensibly dressed, I noted with approval, in the robes of an Amblyopian high priestess. Then I momentarily wondered what had happened to my frame of reference when I considered a lavender velvet robe trimmed with pink fur sensible, merely because it didn't expose several acres of flesh.

this was just a fun romp.

I just hope the next mystery is more...mysterious.