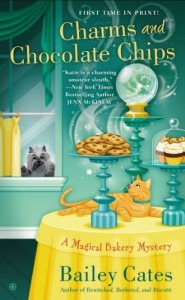 I'll give the author this, these books have been steady and on a similar writing level. That's a good thing, I've often found cozy series tend to fluctuate from book to book, at least for me. However, that also means this series is going to be merely okay; I'm glad I read it but I won't be re-reading it for a while.

Katie is struggling with her new knowledge of being a light witch and seems to be spending all her free time at Georgia Wild, a non-profit local environmental group. However, arriving one night, her ability as a catalyst once again comes into play as she finds the head, Autumn Boles, dead.

I'll admit, I got really worried here when Steve started showing up so much and when other things happened.

Katie used the voice on Declean and her witchcraft becomes real for him.

But, Ms. Cates does a good job and managed, barely, to keep me from declaring a return of the triangle. I did find this a tad predictable, so apparently did Detective Quinn as he made little protest about Katie's involvement. I also knew who the murderer was basically when we met them.

Bringing Mary Jane, Katie's' mother, here - finally - was great though. Things were said, on both sides, that needed to be and her mother proves to be a great deal of help with everything.

All in all, another decent addition to the series and I'm interested to see what comes next. I'm also excited to "finish" a series, at least for now.