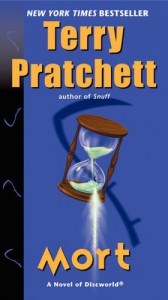 I can remember vividly the first time I read Harry Potter and the Order of the Phoenix. I'd haltingly made my way through the first half of the book, putting it down and picking it back up again. As much as I enjoyed it, and I did, it just didn't seem to hold my interest. I reached a little over the halfway mark at midnight and decided to finish the chapter then call it a night.

Except the chapter ended in a cliffhanger. One more chapter turned into another as the book raced to its sad conclusion. At four in the morning, I closed the book, tears and sleep blurring my eyes. I've always likened it to a roller coaster. You inch along up and up and up. You have time to take a look around, think about the other rides (read books here) you could be on. But once you've hit the downward slope, there are no brakes.

That sums up reading Mort perfectly.

I can see why people like Terry Pratchett. His work is amazing, with great depth and close enough to our own that you feel there's some way to visit. It reminds me of Jasper Fforde's world: close and yet so far away from the familiar. His writing is spot on and hardly a page went by that I wasn't chuckling over a phrase or situation. There are so many great quotes in this book.

But the characters...As one might surmise from the title, the main character is Mort. It was made clear from the beginning that he was not the most promising of people on the Disc.

It was also acutely embarrassing to Mort’s family that the youngest son was not at all serious and had about the same talent for horticulture that you would find in a dead starfish. It wasn’t that he was unhelpful, but he had the kind of vague, cheerful helpfulness that serious men soon learn to dread.

I really wanted to like Mort and yet...he never came across as real. He was the plot made flesh, doing things to move the story along to it's conclusion but I never could believe that he was making these decisions or feeling these feelings. The rest of the characters, except for Death, also tended to be bland and I never completely warmed up to them. And don't get me started on the whole "romantic feelings" Mort supposedly had for Keli...I'm more convinced he he had a brief moment of insanity or maybe indigestion.

“Mort was already aware that love made you feel hot and cold and cruel and weak, but he hadn't realized that it could make you stupid.”- see, not only symptoms of indigestion but also an acknowledgement of his shaky mental state!

However, the Anthropomorphic Personification of Death is wonderful! Despite the fact that "he wouldn't understand people as long as he lived," he's clearly fascinated by humanity - by its creativity, capacity for fun, and emotions. Pratchett manages what I would have considered an impossible task: to make you root for Death, miss him when he doesn't appear in the narrative, and make him sympathetic. Kudos to you, sir!

Now, if you will allow me to go far out into left field for a bit, I have some thoughts that I'm not sure are right but I still feel like I should share. However I'm going to have to spoiler tag them as they deal with some major plot points.

While I was finishing Mort, something happened.

The word I kept using to describe Mort as a characters was "not real." Which is true; he comes across as a pale shadow compared to Death, who might be an anthropomorphic personification and doesn't really get human feelings but still all but leaps off the page.

What if that's the point.

Death doesn't play by the rules of average people. He can walk through walls and do other things that we can't do. The reason for this is that he's real. More so then most of the people on Discworld and especially the physical world. Binky the horse is the same way; Mort thinks at one point that "compared to the others he looked more real than ever. More solid. More horsey. Slightly larger than life."

Then consider during the second half of the book when Mort is taking over Death's job as "Death is whoever does Death’s job." We see the signs really start to show when he arrives at the Inn. At one point the Innkeeper comments:

— more solid than he should do.

That was ridiculous, of course. The bar was solid, the floor was solid, the customers were as solid as you could wish for. Yet Mort, standing there looking rather embarrassed and casually sipping a liquid you could clean spoons with, seemed to emit a particularly potent sort of solidness, an extra dimension of realness. His hair was more hairy, his clothes more clothy, his boots the epitome of bootness. It made your head ache just to look at him.

It's not until near the end that Cutwell explains exactly what's going on.

"I was nearly sure last night. He's becoming real."

"But he's becoming more real. Extremely real. Nearly as real as Death, and you don't get much realler. Not much realler at all."

I think that Pratchett may have taken this one step further. To the reader, Death is a real character; one that inexplicably we can relate to and care about. But his other characters, particularly Mort, are shades. Are not real. It is not until Mort starts to become Death that he grows more interesting and relatable. By the end of the book, I was worried about him and wanted him to somehow "cheat" Death.

Or to give you LL's humorous summation when he heard my hypothesis (Thank you hubby for letting me share this!):

*spoken in his best impersination of Werner Herzog*

As Mort develops as a character, he becomes less of a “character” or plot device and more of a person. Simultaneously, as Death develops as a character, he paradoxically recedes into the background and becomes a “character” or plot device. Pratchett here establishes a commentary on the nature of characters in literature: as Mort becomes more “real,” he steps out of the book and becomes, like Death, a metatextual person or device, simultaneously both within and without the narrative. Death, by contract, becomes a “character” and, to my mind, is diminished from his usual role as a metatextual device (or, bluntly, Pratchett’s avatar).

In the end, I really enjoyed Mort. I love Pratchett's world and his writing style. While I wish I could have connected with many of his characters more, I came out of this loving Death even more then I went in. I call that a win. I'm definitely moving on to the next book in my challenge, Reaper Man. If any of you want to join me, let me know!