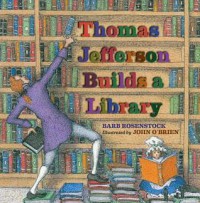 "I cannot live without books."

Every book lover has heard this quote and probably has used it once or twice. But how many of us know much about the man behind the quote besides he's the author of the Declaration of Independence and the 3rd President of the USA? This is a wonderful non-fiction picture book that every booklover needs to read as it chronicles his reading and collecting throughout his life.

I knew that the Library of Congress, after a fire, was jump started by Jefferson's massive library but I didn't realize that it was the second of three libraries he collected during his lifetime (though certainly the biggest). I also didn't realize that the second collection was more then 6,500 books which took ten wagons each carrying a ton of books!

One of the most touching moments was learning about the favorite book of both he and his wife, The Life and Opinions of Tristram Shandy, Gentleman. They had both copied lines from the book and he kept the paper wound with a lock of Martha's hair after her death.

I'll admit I was jealous though when the book talked about his book buying spree in Europe after the war. He bought 2,000 book in 5 years!

Something I'd like to incorporate in my life is his schedule of reading. Science was to be read before noon, history till supper, and fiction from when the sun went down until bed. It makes a lot of sense, reading harder subjects when the mind is fresh and rested and for enjoyment before sleeping.

There is so much packed into this small book, with quotes and extra information appearing on small books inserted in the page. The illustrations were not completely to my taste but they worked well at times and certainly didn't detract from the text. This is one picture book I'm going to own, children or no.