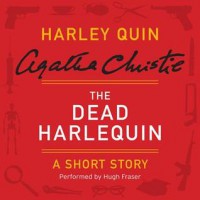 Before this, I'd never even heard of Christie's Harley Quin series of short stories. I'll admit that even after listening to this, I still don't know what to think.

Mr. Satterwaithe buys a painting of a dead harlequin lying on the floor with the same person looking in at the scene from the window. He asks the artist to join him for dinner along with Colonel Monkton and the history behind the picture comes out. The sudden suicide of Lord Charnley, which Monkton was there for, is the source and elements of the picture are suggestive. Two other guests who were there arrive "unexpectedly," both wanting to purchase the picture. Mr. Harley Quin appears and the truth comes out.

This is an odd tale. One could call it a mystery story but I'm not sure it actually manages to be one. Information is given and you can guess early on much of the truth but so many of the characters are introduced late that it certainly isn't a fair one.

Then there's Quin. There's never an explanation of who or what he is. If you know anything about opera or classic theater, the name is clearly an allusion to the character Harlequin. Yet in this story he's so much beyond the clown or even romantic hero the original character is. Though there are iterations where he is an intelligent trickster and that is certainly part of his character here.

Perhaps my problem with this story is that there is almost certainly something supernatural about him. Quin comes and goes whenever he wishes and nobody sees him do it or really sees him at all until he wishes them to. If you are interested in learning more about Mr. Quin, I suggest these two sites, just be warned there are spoilers there.

Hugh Frasier does a great job narrating this story and I'll definitely look into listening to the rest of these. I just feel that the mystery wasn't fair and Quin a bit too mysterious for my tastes.