Secret Lives of the Tsars 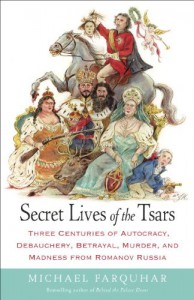 Though I've been working my way through this slowly, don't think it was because I found it boring. Quite the reverse, actually. Regrettably, I know little Russian history, so I learned vast amounts from this book. Interesting enough, there was a surprising amount of overlap between this and A Royal Experiment.

The Romanovs were certainly an interesting and wildly different group of monarchs but they all seemed to bring some new bizarre element to their mythos. Each monarch gets at least a chapter, though a few of the ...shorter ruling might straddle two chapters. Nicholas II and his family get 3+ chapters as they also are connected with the end of the monarchy in Russia.

For Farquhar does far more here then "historical tabloid," as I've always thought of it. You learn about the society surrounding them and that they influenced. It's a quick, fun read that's a good introduction to basics of Russian history.

And I really learned a lot from this, as was demonstrated when we finally sat down and watched Russian Ark. It's available on Netflix right now and while it can seem long at times and time periods bleed together to the point where it's hard to figure things out at times, LL and I really enjoyed it. It was filmed at the Winter Palace of the Hermitage in St. Petersburg as one single shot. The entire 90+ minute movie is one shot where the camera weaves in and out of rooms and people from history appear and disappear in front of your sight. I would not have gotten nearly what I did from the movie if I hadn't just read this book. If you do decide to watch this, I recommend this site as it notes and describes some of the elements that you'll miss.

This was precisely what I thought it would be and has already led me to other books on Russian History that I've added to my queue. It was an interesting, informative, and fun.