I Had Trouble in Getting to Solla Sollew 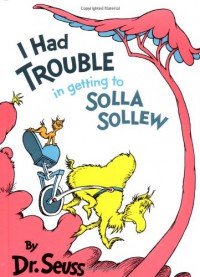 I can't believe it took me this long to finally read this book! The last few Seuss books I've read for the first time haven't really worked for me and I'd begun to wonder if a large part of my love for the author/illustrator came from nostalgia.

I can now put that fear to rest as I love this book.

I first learned of Solla Sollew from the soundtrack for the musical Seussical. I've never seen it preformed but I love the Original Broadway Cast Recording. One of my favorite songs is Solla Sollew as JoJo (the Mayor's son) and Horton both sing of trying to find their way there. I also finally learned where General Genghis Kahn Schmitz comes from.

The plot, idea, and illustrations were all wonderful. I loved the troubles our young friend encounters, particularly the Skritz and the Skrink. His long, arduous travel to get away from troubles only leads to many more. The General and Poozers in Pompelmoose Pass were some of my favorite characters he meets.

The illustrations of the River Wah-Hoo and Solla Sollew itself were some of the best though my absolute favorite is the front and back piece pictures of the MC making their way through a crazy, Seussian maze.

This is one I'll have to own.