Blizzard of Glass: The Halifax Explosion of 1917 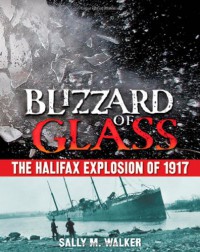 The story of the Mont-Blanc's explosion in 1917 was mentioned in the prologue of The Unthinkable. I was so shocked when I read it, partly for the reason I'd never heard of this disaster before. Unfortunately, the only book I could find about it at the library was this, a middle grade-YA history book. Sally M. Walker did a magnificent job, however; though the text was a bit simple at times, the research and facts clearly weren't.

December 6 1917 the Mont-Blanc and Imo collided in the narrow portion of Halifax harbor. Fire quickly overwhelmed the men aboard and as it became uncontrollable, the crew abandoned the ship as the Mont-Blanc floated to Pier 6. The major problem stemmed from the fact that the ship was a munitions transport (WWI was going on at the time) and was stuffed with 2,925 tons of explosive material - gun cotton, TNT, benzene, etc! When it went off, it leveled a large chunk of the Richmond and Dartmouth districts surrounding the harbor. Until the Atomic bomb in WWII, this was this largest man made explosion and scientist working on the A-bomb studied this disaster in order to understand what damage their weapon could cause.

Walker does an excellent job of bringing the widespread disaster to the human level. She chose five families - three in Richmond and two in Dartmouth - to cover a spectrum of different experiences. The Coleman family, who lost their father who was the telegraph operator because he stayed long enough to send out a call for help, are looked at. So are the O'Brien family, who lost their father but unlike other families, the widow somehow kept her 10 children together even with her monthly pension from the Halifax Relief Commission.

This is not just a book for children but for everyone. While it deals with some difficult issues, the author deals with this in a tasteful way. While I hope to find an adult non-fiction on this event, this was a very educational and touching book.