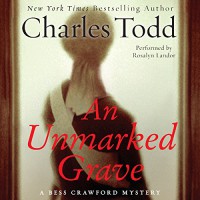 I must admit that this is one of my favorite books of this series. The mystery isn't...there isn't one really. Oh, they look everywhere for the person who killed two people at the first and who keeps cleaning up anyone who's seen them, including Bess. But there aren't really clues to follow for the reader; Bess and others merely chase after likely candidates.

So why do I like this book so much? Some of it is the beginning, where the Spanish Influenza is discussed quite a bit. While I knew facts of it's deadly spread, "seeing" the effects and hearing how at times the number of sufferers overwhelmed those of the wounded was astonishing. Plus, Todd did the one thing to win points with me; their main character isn't made untouchable. Bess falls victim to the flu and barely survives (as of course we knew she would) with the help of her family and Simon.

Her slow return to full health allows her to remain in England, which works out as she tries to learn more about the deaths from the families of the two victims.

There is a lot in the book. We get to see the war's affect on outlying communities, the Canadian and American forces appear, and we get a look at the front lines (or very close to them) for the first time in the series. While battles aren't really mentioned (the pushes often blended together into weeks and months of the same battle), names like Ypres and the Somme stand out to anyone who knows a little about World War I.

And can I just address how much I want to see Bess and Brandon together? They are so get together and every book gives me a bit of hope...then nothing. Though her reactions to what happens to him in this book make me think they will eventually get together. I just don't know when she'll get a clue about his feelings for her.

It's not like he's the only guy who obviously likes her. The Australian officer from the last book makes a reappearance here and the wounded American serving in the Canadian forces clearly likes her. He positively bristles every time Brandon is mentioned. I'll admit, his obvious feelings for her was the main reason I didn't really like him.