Shaun the Sheep: The Beast of Soggy Moor 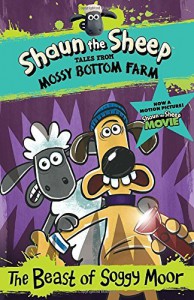 If you haven't watched Shaun the Sheep, you should. A spin-off of Wallace and Gromit, it's

extremely funny, with great characters and crazy hi-jinks. My favorite character has to be Shirley. Containing everything from pop culture references (particularly in the movie) to invading Alpacas, you never know quite what's going to happen. There is no real dialogue besides baas, other animal noises, and grunts from the farmer but they don't need it. The faces and situations tell you everything.

Still, I wasn't sure what to expect from a book with these characters; I only knew I had to give it a try when I saw it in my library.

By and large, it wasn't bad. Unlike the show, this is clearly for children; however, it was well written and the mystery was actually (for the age level) a solvable mystery. The clues were present and you could follow it to a logical conclusion. There was even an ending that teased that there might be more to the story.

The characterizations were spot on and I liked that we actually got to see their thought processes (remember, they don't talk). The short cartoons and illustrations that littered the book added to the story quite well and called back to the show.

All in all, it was good but not something I would own for myself. I would definitely, thought, get it for a child who loves the show.