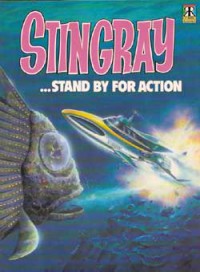 The above link explains how an American girl was introduced to Gerry Anderson's two most well known shows (at least over here) as well as a bit about how these comics work.

As stated in the previous comic album's review, these are great adaptations and well illustrated. 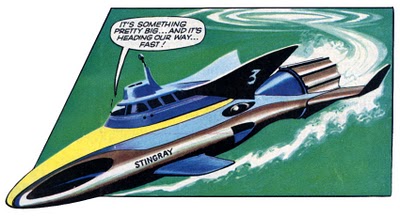 Nuclear Aircraft Carriers have been going missing. Stingray shadows one but after losing it, they are captured by a giant Jellyfish under the control of Titan. Using lights that hypnotize people, he is going to wreak vengeance on the Terran people. Kinda...dated, I guess, but it is a fun read.

Here we have another group of underwater creatures (this time ones that look like lobsters) who are out to destroy the humans and take over the abovewater world. This story is especially interesting for two reasons: first that we see another section of the armed forces-the army in this case, and second one of the female characters plays an important part in this (Marina, the beautiful, mute woman from under the sea who use to be a prisoner of Triton and now works with the crew of Stingray).

This takes place directly after the last story. Atlanta is Commander Shore's daughter and the other major female character of the series. She is kidnapped by an agent of Triton in order to serve as bait for Troy...who of course goes off the rescue her. A bit cliché, but it is a very interesting read.

Very little. My biggest on the book itself is the pages are starting to fall out, the construction is adequate but not great. For a rant on what this book and others represent to me, again I refer y0ou to my previous review above.

If you like the series or are interested in finding out what it's all about, I would highly recommend this book. If you are a young boy who likes comic books, this is a good little read.