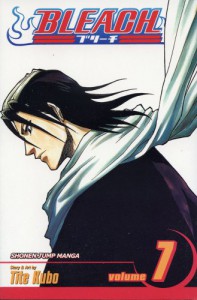 Byakuya Kuchiki: A Soul Reaper captain, he is also brother to Rukia. Why he acts so cold and...nearly evil to the reader's mind is unclear.

Renji Abarai: The vice-captain or Lieutenant of Kuchiki, he seems to know Rukia well but then why does he look like he's trying to kill her.

*The Gush*
One of the best of the early volumes. The fight between Ichigo and Renji is awesome and Byakuya Kuchiki does not get enough page time. I can't wait until we see him again. The training is epic. I love anything with Urahara and he is in rare form in this volume. Just read this. Make it at least this far.

*The Rant*
This volume does jump around a bit as characters disperse as the plot leads them to. Still, everyone gets their moment, though the focus is on Ichigo.

*Conclusion*
Read this. At least make it this far in the series. The fighting is awesome and the characters are starting to become much more interesting.
3296 BOOKS
Goodreads