Star Trek IDW Comic Vol 3: A very interesting reimagining of one of the episodes...and a bit of foreshadowing 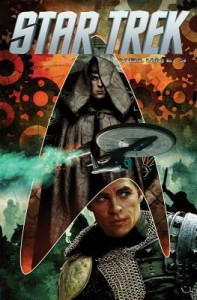 Yet another addition to the Star Trek AOS (Alternate Original Series) comic series by IDW. Had been waiting to read this forever and it was worth the wait.

The Return of the Archons:

A re-imagining of a classic Star Trek episode, this takes that plot and turns it on its head! Will have to read it several more times to decide exactly how I feel about this, but it was well done and it was great to see Pike again, even for a brief moment.

The Truth about Tribbles:

Tribbles are Star Trek gold (as demonstrated by the fact that in the second season blueray of TOS, there is a disc dedicated solely to that episode, the animated sequel, and the Deep Space Nine revisit of it) and so it was no surprise to see them pop up in the AOS comics. However, the new crew's introduction to them is a little different than their alternate selves, making for a new and interesting chapter in Tribble lore. Might be my favorite part of the entire comic series.

Once again, the artwork is superb, with the characters actually looking like their actors, particularly in The Return of the Archons, which is done in a more series vein then the tribble story. The writing is likewise excellent, working seamlessly with the artwork to tell the story. Having the introduction to this graphic novel written by the man responsible for creating the Tribbles was merely the icing on the cake.

My major problem with this volume was with the story about the Archons. I am...torn with whether I like the twist that this was condoned by Starfleet or appalled. Don't get me wrong, Starfleet in many instances is revealed to be made up of fallible beings that sometimes allow terrible things to happen (see Tarsus IV, etc.). However, for them to be this...active in something so wrong and then basically say that the Enterprise and particularly its captain was becoming expendable if they didn't let sleeping dogs lie...this could be leading in troubling directions for the comic series. Add that to the potential the next movie Into Darkness is raising and I am left wondering if Roddenberry's dream of humanity still being humanity but learning and growing and becoming better in not being turned into a dystopian nightmare because of our current pessimistic feelings towards the world around us. If so, that is not just sad; it is a travesty. I am going to continue reading, as I actually like this idea as a subplot in a larger arc. As THE PLOT, I am less then thrilled.

If you liked the other volumes, do read this. If you are dying for Into Darkness to come out, read this. I would be interested to hear how any of you feel about the first story; I may be reading too much into it.

Note: Since I've retooled this for Booklikes on 12/11/2013, I feel I need to reread this since I've seen the movie...multiple times...and own the blue ray...etc. So look for a second part to this after I do that as there are issues with the Archons that make sense after the new movie.