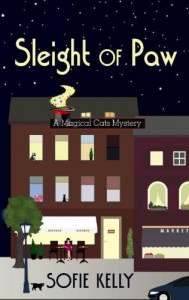 It's winter in Mayville Heights, Minnesota and as you probably know, that means it is either: "About to Snow, Snowing, (or) Get Out the Shovel." Kathleen still loves living in this small town and is having second thoughts on whether she's going to go back to Boston when her contract ends. Those thoughts get pushed aside though when a former principle and someone who helped more than one person in town leave behind a troubled childhood and find what they love to do is found dead in a alley. Things get further complicated when Detective Marcus Gorden, whose shown an interest in Kathleen, arrests a friend for Agatha's murder. Our intrepid librarian decides to help out, with the aid once again of her unique cats.

I enjoyed this story almost as much as the first one. Old friends return and we get to learn even more about them. I especially liked seeing more of Roma and Old Harry, but missed Oren as he didn't really appear in this one besides the first chapter or so. The mystery was interesting and well put together; I did pick out the perpetrator though, but it was as much (or more) knowledge of how cozies work as from clues in the text.

Justin was almost never on radar, he was new to the book, and seemed the least likely person - even with the money.

One of my issues was with Kathleen's reactions to Marcus. I stated in my review of the previous book how much a fan I am of him. So I'm less then sanguine about how K. thinks and acts towards him. I won't go into details as I'm trying not to spoil it but I felt some of it was contrived by the author to s t r e t c h that plot thread just that bit further.

On the other hand, this has to be one of the most exciting cozy mysteries I've ever read. Seriously.

I enjoyed this book and am looking forward to the next one. Unfortunately, I have to wait till this time next month as it's been loaned out. *Sigh* Have to wait for more Owen and Hercules fun.

2014 Anthropormorphism Books to Buy Far-fetched Fiction Library Books Mystery Where Was This When I Was Young?