Library Wars: Love and War (Vol # 1) - We desperately need the novels of this series! 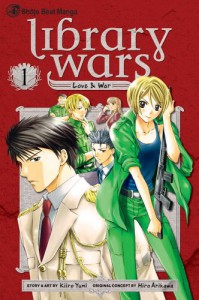 This is a reread for me and I'm trying to figure out why I didn't write one in the first place! (Might have something to do with reading at the same time I was binging on my library's complete One Piece collection of manga.) I was sold on the idea of this manga from the first moment I cracked open the cover and I can't wait until the anime comes out.

This is a manga based on a novel series. The novels are not out over here, unfortunately; but I have hope they'll be translated and published here eventually. The setting is Japan in the near future. A Media Betterment Act was passed at some point close in our future. With it, a committee known as the MBC began hunting down and seizing all 'offensive' books and generally to "deny citizens their right to have access to free media." Libraries are the only institutions that can combat this and it becomes just that with two forces in defensive maneuvers against each other. Library defense forces protect their patrons' rights to have access to and actually read materials while the MBC attempts to curtail or stop this entirely.

So library staff are in military ranks and they are taught how to defend and use guns as well as the Japanese Decimal System. Into this world enters our main character, Iku Kasahara, who is in one word: adorable. She's very tall, a tomboy who loves books with a passion, and wears her heart on her sleeve. A book she had longed for and was about to buy was saved from a MBC raid by a Defense force member and her goal is to be exactly like her hero or 'prince' as she calls him. She's not the brightest nor the best (in terms of academia anyway), but she has determination and drive. She also gets into tons of scraps to the bemusement of Instructor Komaki, her roommate Shibazaki, and Major Genda as well as the annoyance of Instructor Dojo and fellow recruit Tezuka. Iku proves herself capable though and ends up a new member of the Task Force, an elite group who preforms both Librarian and Defense Force jobs.

Instructor Dojo is a stocky, well-trained Librarian Second Class. While tough, especially on Iku, he does so to prepare the trainees for what they will face from the MBC. His interactions with Iku are often little more then oil and water if they used flamethrowers against each other but then there are moments when it's clear he cares for what happens to this new member of the force.

While several characters are introduced here, we learn little about them besides Komaki finds Iku and her interactions with Dojo hilarious (though he's also a calming

force and quite wise) and Tezuka is a perfect student who dislikes our MC intensely. the exception to this is Dojo, as mentioned above. From the beginning we see him and Iku butt heads and they always manage to get on each others' nerves. Yet he seems to care about what happens to her and can be quite nice; they just seem to always miss each other.

One thing I've seen people remark on is the implausiblity of the idea. Strangely, I never had that problem, accepting these battles with more then words over issues all too familiar with us today. Or maybe it's just that i can understand fighting to protect books and peoples' right to read.

2013 2014 Awesome Heroines Books I Need to Buy Brilliant Averageness Far-fetched Fiction Graphic Novel Manga Reviews to Write Shoujo The Shelf of Awesomeness! Where Was This When I Was Young? YA