Murder with Puffins (Meg Langslow Mystery # 2) - Standing out in the rain with the characters, good descriptions but not a fun feeling! 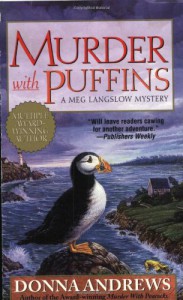 My word, I love this series. The writing, as I'll show at various points below, had me chuckling throughout my read. Having family that can come up with their own brand of...interesting, I get these people and Meg's positive and negative reactions to her family. I think most of us can. And this takes us far away from the setting of the first book, traveling all the way to a small island in Maine. Meg and Michael try to escape the family still camped out in Yorktown after the wedding, and she remembers a family get away and they set out for peace and time together.

"You can learn a lot about someone from his medicine cabinet," I said as I poked through the bottles, jars, and tubes in the cabinet.

"Remind me to clean my medicine cabinet before you get another chance to rummage through it," Michael said...

"...obviously he was one of those suicidal idiots who never threw out old medicine."

"On second thought, remind me to put a padlock on my medicine cabinet," Michael said.

They arrive to find her newly remarried parents back from their honeymoon, her brother, and another family member and friend all beat them to the punch. Therefore, peace and time together are about as likely as pleasant weather will be on the island with a hurricane coming in.

Most of the book is Meg and Michael getting their marching orders from various family members or escaping from such "requests," but the murder comes soon enough with more people lined up prepared to kill the victim then you'd believe. Even in murder mysteries, this artist was majorly disliked! Two of those suspects are Meg's dad and...great aunt (I think) so, once again she sets off to find the truth with Michael valiantly helping her as he's done since they first met.

"You know, we shouldn't lose sight of the fact that James Jackson is a suspect, too," I said.

"He's lucky he wasn't the victim," Michael grumbled. "Writing this badly ought to be a capital offense." (It was bad and that statement brought quite a laugh)  p. 239

The thing is, these are interesting mysteries as the main character doesn't suddenly become an amazing investigator, but instead Meg acts as I'd think a normal person would. This does two interesting things: one, makes these already slightly out there stories beter grounded in reality and two, causes the story (and particularly the plot and clues coming in) to not run in a straight forward manner but works to help confuse the reader. It certainly works with me, as I didn't see this once coming at all. The murderer shocked me.

I can't wait to pick up the nest one; I can't remember the last time I've had so many good mysteries to read!

And I'll leave you with something that, while long, summed up something I've felt for quite some time but never could quite put into words. I like them and find them beautiful but I've always been uncomfortable with birds as pets.

"And the eyes - maybe it's just me, but I've always found birds' eyes a little cold and alien. You get the feeling they're off thinking strange, fluttery little splinter thoughts; and you hope it's all about seeds and nuts and where to find a birdbath, and not something like acting out in real life their great-great-grandfather's starring role in The Birds. May be I'd done her artistic skills an injustice. Rhapsody had captured everything I disliked about birds' eyes so accurately that a chill went down my spine."

Mystery Where Was This When I Was Young? Best Mysteries Ever! Southern Charm 2014 Library Books