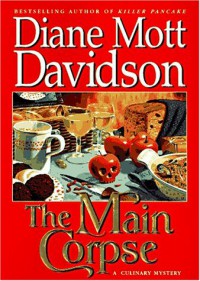 For my review of the book my first time reading, please click here.

Like so many other reads, the second time through was when I started to notice things. Also, I think I wrote my original review far after I'd read the book. Apparently I'd forgot a lot.

There are parts I really like of this book, Maguire Perkins being one. Anytime Bo Farquhar is mentioned I'm always happy so actually seeing him was a major plus. And Marla is always fun.

But listening to it again brought up some issue and most revolved around Goldy's major decision after Marla's' arrest. Quite frankly the whole thing is way out of character for her. The woman who worries incessantly about her son takes him straight into danger?! And a woman who recently married a police detective plans a jail break with a man who just got out of prison? I don't care about the circumstances, he'd be breaking his parole. Yes there are many funny moments...but I couldn't shake the obvious issue that THIS WOULD NEVER HAPPEN!

Yet...Goldy still doesn't trust many people, at times not even Tom. She's also a fixer. So I can almost accept it but it takes a great deal of suspension of belief.

Again, Barbara Rosenblat's reading really adds to the story. And once again, the ending brought tears to my eyes.